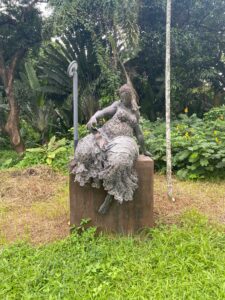 La Novia, a metalcraft sculpture sized at 194 cm x 117 cm x 104 cm (HxWxD), showcases a lady sitting on a base holding her shoe in her right hand. Her flowing eyelet lace dress extends until her ankle. Her hair is wound up on her head and she casually looks down. Her arms are robust and her figure voluptuous. At night, the La Novia lights up as if illuminating those around it.

According to Daniel dela Cruz, the sculpture La Novia (The Bride) represents the beauty and grace of a youthful bride and how she carries within her a vigor, one that radiates enough to bring life to surface. In this sculpture, Daniel dela Cruz highlighted a part of an evolution of a woman: the bride. A bride is a precursor to punctuate a union and the creation of a family. This woman evolves to another character whose role commands her to be a vessel of strength. She is weathered, changed and transformed but one thing stays the same: her ability to shed light and wisdom from bouts of experiences and even under the pressures of time. 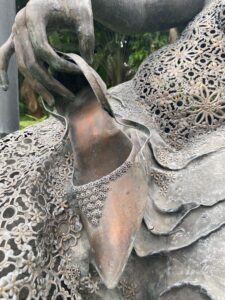 The processes he employs on the metal are a combination of different techniques such as hand hammering, carving, welding, sculpting, grinding and sanding – that allow him to make intricate and striking details, unique to each piece. This is seen in the visible airiness of the cloth worn by the bride, one you cannot expect from a metal sculpture. You can begin to imagine the soft eyelet lace just gliding on the figure. The concreteness of the metal as material represents the solid foundation of a woman. Her feminine touch, on the other hand, is represented in the most affecting details such as the dress’ pattern and the dainty shoes. Overtime, the sculpture change and gain patina, adding another layer to the piece overall. Just as La Novia enters a new chapter in her life, she is gifted with another role to undertake and anticipates another depth to her being.

La Novia (The Bride) is akin to Daniel dela Cruz’s art practice. Having started out as a product designer, Daniel dela Cruz continuously climbed the corporate design ladder. Before he turned 40 years old, he made a big move to dabble in the Philippine visual arts scene. His mastery of the skills of the trade allowed him a seamless move to the arts. With the help of his friends and colleagues, he has managed to carve out a name ever since his first exhibition in 2007. 14 years into his visual arts career, he holds under his belt numerous solo and group exhibitions that has been widely and joyfully received by the art community. It is indeed a chapter of fruition, so to speak.

Just Like La Novia, Daniel dela Cruz continuously grows in his art. Admittedly, he pushes himself to create something he has never done to achieve lengths he could have never gone before. He has weathered the pressures of his time and allowed a natural evolution to his craft. From themes of women and motherhood to religion and mental health, Daniel dela Cruz breathes in inspirations and seeks out concepts to play with, initially on a personal level. He ascribes meaning to his metal sculptures in the hopes of people relating and connecting to it. He purges out concepts that allow people to think of matters and issues, in the hopes of it living. He waits to see how it will turn out. He, then, waits for another round of inspiration to come to him. He waits to see another chapter.

Just like how a woman transforms to be a bride, creative possibilities stand by the foot of the door in anticipation of what is to come.