The Story of a House

They say a house is just a house. It is built with 4 walls, a roof and a door.

A two-storey house tucked neatly in the gardens of Jardin De Miramar in Antipolo holds in itself an undeniable charm. It is this same appeal that the architect harvested then transformed by the artist to create a masterpiece of home.

An architect of practical choices, Architect Rosario “Ning” Encarnacion Tan encountered the house in 1992 when the owner, Edna Del Rosario asked her to renovate it.

Known to practice folk architecture in the Philippines, the first thing that fascinated her was the mango trees that envelope the house and the big balcony that extended to the front and sides. She kept the balcony as an area to experience the breath of nature from the surrounding trees. She painted the walls with vibrant colors of fruits and leaves, in hindsight. She put lattices in the ceilings allowing her to incorporate the majesty of nature in reinvigorating a house originally built in the 1950’s.

Embracing the original layout of the house, Arch. Ning Tan opted to clear more spaces from the bedroom to the living room up to the balcony. The insides of the house was designed to be as spacious as it can be with natural light streaming from the arched round top windows and french doors situated in the front and sides.

She focused on adding posts in the valley in the balcony that support the downward load of the metal rooves as they plunge upwards again in a rhythm, as if directing your eyes towards the canopies of nature.

Her use of existing resources and features floated her unique design practice, one that is extensive yet unpresuming. Her design philosophy is influenced by the landscape designs of Geoffrey Bawa, modern masterpieces of Ed Calma and the aesthetic excellence of Jose Pedro Recio, among many. Her respectful choices can be attributed to great thinkers in Philippine culture and society such as Felipe de Leon Jr. and Fernando Zialcita, both forcefields in propagating the rich tangible and intagible resources of the country.

Arch. Tan reaped in a collection of observations, wove them into her plan and finally converted an ordinary house into a home built for the tropics.

After the renovation of the house, the owner then had an inclined idea that it would be perfect to house Santa Claus memorabilia that she collected through the years. In order to make the house look like Santa’s, she tapped the expertise of the best muralist in town.

A home built for the tropics proved an easy feat for the practice of Arch. Tan. For muralist Alfred Galvez, it is a challenge like no other. The idea was to house Santa Claus in the tropics, a complete irony to Santa Claus’ profile and history. 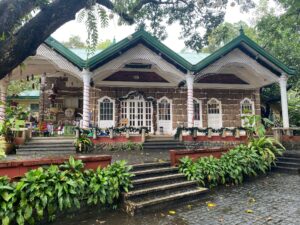 The façade of the house was first painted to replicate a brick house outlined in snow. 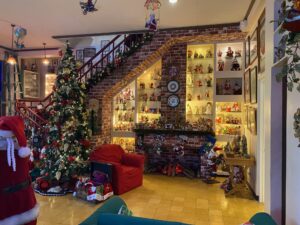 The interior walls were also painted to mimic bricks using a water-based paint. 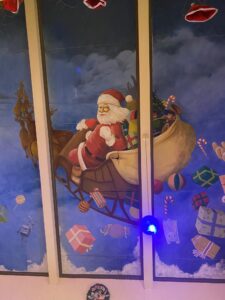 The final piece is a Santa Claus mural carefully painted in a seemingly triptych ceiling that showcased Santa Claus in a sled drawn by seven of his reindeers amidst the clouds. Visibly leaving, Santa’s toys and gifts left a trail of magic for the little girls and boys to discover. When asked about the concept that he had in mind, Alfred Galvez is quick to answer. His artistic process relies heavily on research. That is why he chose the mystery of Santa Claus as his workable theme for the tropical house. The theme mirrors the beliefs of Filipinos that Santa Claus is a white-haired, white-bearded guy who drops off gifts for little girls and boys, leaving in his wake a set of enthralled minds.

Owing his inspiration to Baroque and Renaissance artists, Alfred Galvez believes that small details make or break the overall theme of the work. Relating the mural to the actual space is what he considers the biggest challenge in his practice, alongside letting the profile of the client speak in visual elements. The process of making a mural is quite a tedious task. It involves layers upon layers of careful painting. It is a good kind of tedious although, because the painting inevitably unfolds itself to the artist.

Like Alfred Galvez, Arch. Tan chanced upon and rediscovered the charm of the house. The house unfurled and revealed the possibilities that were present in 1992. It paved the way for the tropical Santa House, highlighted in Alfred Galvez’s façade painting and Santa Claus mural made in 2008. Fast forward to 2020, the house continues to open its doors and welcome people of all ages to discover the magic of Christmas.

They say a house is just a house. This house turned into a home through a collection of stories, drawn expertise and unraveled insights. Famously known as Casa Santa Museum, this is a timeless home that evokes memories, harmony and magic.