Best Movie Wedding Scenes (Plus The Unique Elements You Can Do For Your Own Wedding!) 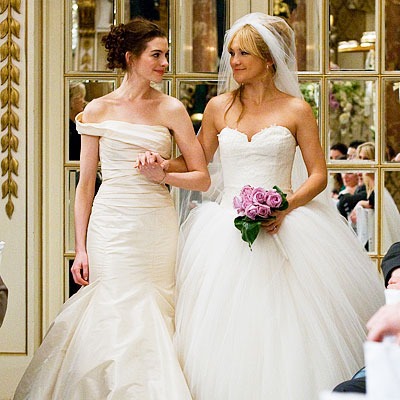 They say getting married is not like in the movies. The wedding doesn’t end in happily ever after. In fact, it starts as soon as you said I do. But lovebug, we’re just as crazy in love as you. So let’s allow ourselves to gush over these best movie wedding scenes. And we’re listing down the unique elements that made the wedding scene even more special!
1. The chemistry of Ian and Toula in My Big Fat Greek Wedding 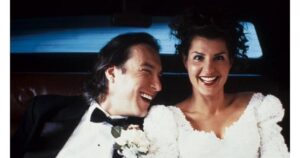 Toula’s Greek heritage is something she can’t shake off just as she can’t shake off a Greek family’s ties with each other. When an American has taken a second look at her, she stresses about her lineage but her beau makes it clear that he wants to be a part of her life – and her equally loving family. We love a chemistry unlike any other! My Big Fat Greek Wedding’s plot does not disappoint! 5 stars!

2. The wedding ceremony of Colin and Araminta in Crazy Rich Asians 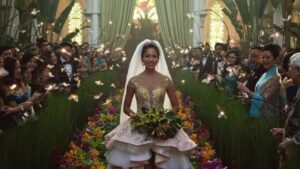 Who hasn’t seen the film? Chances are you’ve been living under a rock. Crazy Rich Asians dubbed from the best-selling book of Kevin Kwan is a 2-hr visual treat of the opulent lifestyle of Easterners. The highlight of the movie? The cousin of the rich lead star gets married to a lady of the same status. Their wedding is the most anticipated event in their social circle which the female lead star is only just warming up to. The wedding ceremony really went all out and had a river for an aisle. The song to walk down forever to? Kina Grannis’ rendition of Can’t Help Falling In Love. We really can’t help by falling in love with this wedding ceremony!

3. The gowns in Bride Wars 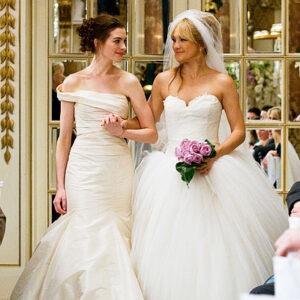 Emma and Liv are best friends who dreamt of nothing but get married to the loves of their lives. When the day finally came, they’re caught in a frenzy of who did it better eventually taking a toll to their special bond. Emma and Liv are equally gorgeous and we can’t help but gush over the cuts and styles of their wedding gowns!

4. The bridesmaid dresses in 27 Dresses 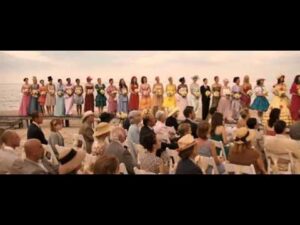 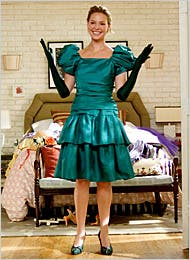 Ever met that lady who did everything for her friends? Well, that’s Tess for you. She has been bridesmaids to every single one of her friends’ wedding. Her growing collection of bridesmaid dresses has been deemed worthy of a feature by a reporter named Kevin. The plot thickens when Tess learns that her sister is getting married to the guy she is secretly in love with. Tess did everything for her friends and loved ones and realizes that she needs to put herself first. She gets married to (guess who). The highlight of the movie? The bridesmaid dresses she wore to her friends’ wedding which in the end became her motif to her own wedding!

5. The natural décor in Bella and Edward’s wedding in The Twilight Saga: Breaking Dawn Part 1 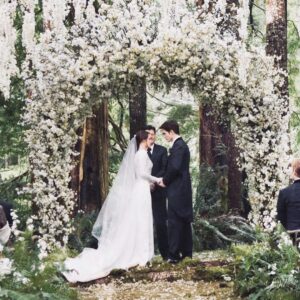 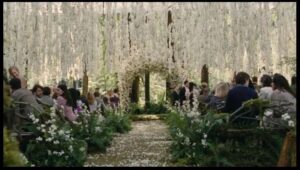 A fantastical marriage involving a human and a vampire? Stuff of dreams right? Now this one needs no introduction as The Twilight Saga single-handedly carved a niche for itself. The highlight in the installment of Breaking Dawn? Well, the lead characters’ wedding of course! The natural décor trend seemed trendy way before it hit Pinterest boards. We totally love the hanging vines and flowers for a backdrop! Sooo romantic!

Looking for an outdoor romantic venue? We’ve got something in mind! You can stylize it with a romantic backdrop like Edward and Bella’s!

6. The characters of Jenna and Matty highlighted in 13 Going on 30. 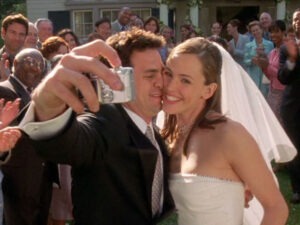 It took Jenna a few years to realize the person she’s become – and she doesn’t like it. She travels back to her childhood home and rediscovers a person she grew up with. She came to terms with herself and longed for a genuine companionship with a longtime friend. The highlight of the movie? The personalities of both the lead characters shined and found their perfect harmony in the end!

7. The setting sun in Donna and Sam’s wedding in Mamma Mia! 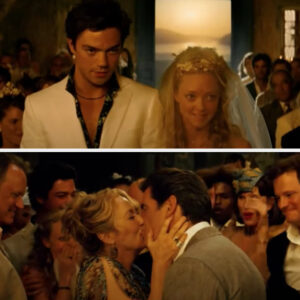 It was supposed to be Sky and Sophie’s scenic mountain wedding! But Donna ended up saying ‘I do’ to Sam instead. What’s not to love in this wedding scene? The setting sun, the Greek mountains and the stunning view? I don’t know about you but this one got us dreaming of a destination wedding!

8. The bouquet of Maria in her wedding to Captain von Trapp in The Sound of Music 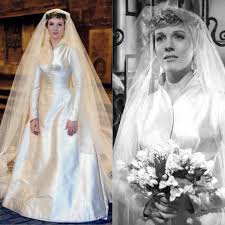 A classic bouquet in a classic movie. Need we say more?

9. The friendship of Carrie, Miranda, Samantha and Charlotte in Sex and the City

When Carrie gets left behind by Mr. Big in the altar, her lifelong sisters made no less than a fuss. Of course, if it happens to our friend, we’re prepared to wage war. The special bond of the ladies in Sex and the City goes beyond the superficial brunch mimosas and designer heels, it extends to intense protection and genuine affection for each other. What’s not to love?

Yes, lovebug. These are all swoon-worthy scenes. It got us dreaming of our own wedding too! What elements will you incorporate in your own wedding?

To view during the week